The Parish Choir sings at the Sunday 9:00 a.m. Mass (Rite II) from late September through Trinity Sunday. We also sing occasional Sunday Evensong services. Our repertoire is diverse and includes choral works of major composers from the 16th through the 20th centuries. Rehearsals during the season are usually Wednesday evenings from 6:30 to 8:30 p.m. 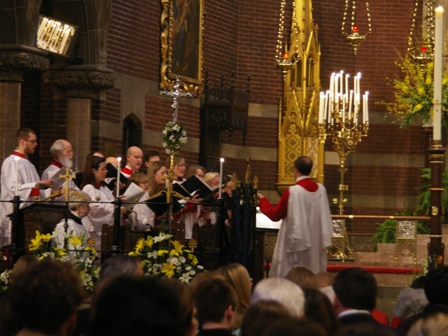 October 15 –  Choral Concert: The Choir of Saint Thomas Fifth Avenue
(Thursday, 7:30 PM)
The Boy Choristers of Saint Thomas Fifth Avenue will present a choral concert at The Church of the Advent; the St Thomas Choir is considered one of the premier boy choirs in the world today. This will be a unique opportunity to welcome them to the wonderful acoustic and ambience of The Church of the Advent. A reception will follow.  Admission to the 75-minute concert is free, an offering will be received to defray expenses. Reception to follow.

November 1 – All Saints Day
Dr Christopher Tye: Sing unto the Lord, ye that are his Saints
Richard Proulx: Prayer of the Venerable Bede

November 20 – Organ Recital in Memory of Gunther Schuller, Aaron Sunstein, Organist
(Friday, 8:00 PM)
As part of a series of memorial events for Boston composer Gunther Schuller (1925-2015) organist Aaron Sunstein will present the premiere performance of Schuller’s complete Symphony for Organ of 1981. Co-sponsored by the Boston Chapter of the American Guild of Organists and The New England Conservatory, the concert will also include music in like spirit by Max Reger and Francisco Correa de Arauxo. Admission is free.

November 22 – Christ the King
Adrian Batten: O sing joyfully unto God our strength
attrb to Thomas Tallis: All people that on earth do dwell

January 10 – The Baptism of our Lord
Thomas Tallis: O Lord, give thy Holy Spirit
Healey Willan: O how sweet, O Lord, is thy Spirit

January 24 – The Third Sunday after the Epiphany – Annual Meeting at 10:00 AM
(Choir Excused)