The Advent's musical tradition has been renowned for generations. Drawing on the resources of a region rich in world-class musicians, the Choirs offer a varied repertoire performed to the highest standards, supported by the historic Aeolian-Skinner organ, a landmark of the American Classic Style.

The Choir of the Church of the Advent sings at the 11:15 Solemn Mass on Sundays, Lessons & Carols for Advent and Christmas, the evening services of Holy Week, and programs a concert every spring. The Choir has issued numerous recordings on the Arsis label. 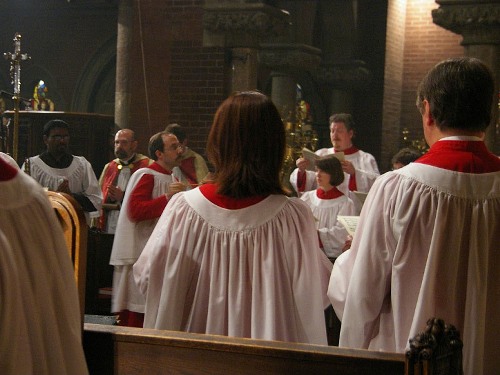 The Parish Choir, volunteers drawn from the Advent community, sings at the 9am Mass on Sundays from late September through Trinity Sunday, Christmas Day, Epiphany, and the Feast of the Ascension, among other dates.
9:00 Music Schedule

The Advent's Aeolian-Skinner organ (Opus 940, 1936) is one of the most celebrated church organs in the world. Read more about this masterpiece here, or learn about the history of the Advent's instruments.

Mark Dwyer came to the Advent from St Paul's Parish, K Street, in Washington, DC, in 2007. He was formerly the Music Director at the Cathedral of All Saints in Albany, NY, and before that Associate Organist & Choirmaster here at the Advent. A Worcester native and 1985 graduate of the New England Conservatory (also earning a Master's Degree in 1990), where he studied with Yuko Hayashi, William Porter, Frank Taylor and Charles Krigbaum, Mark has also been a faculty member and choirmaster at the annual Saint Michael's Conference for Young People for many years. An active accompanist and recitalist, Mark has performed in North and South America and Europe. He is featured on several recordings by the Advent Choir as both accompanist and conductor, and is the performer on a JAV recording of the Advent's Aeolian-Skinner organ in the series "Great Organ Builders of America: A Retrospective." Mark and his wife Cheryl have a son, Douglas.

Here, Mark plays the familiar hymn For all the saints on the Advent’s Aeolian-Skinner organ: http://youtu.be/KlFAu9LLgsE

Praised for his “exquisite playing” (Journal of the Association of Anglican Musicians), Ross Wood has been Associate Organist & Choirmaster at Boston’s Church of the Advent since 2001.  He received his doctorate from Eastman School of Music in the studio of Russell Saunders.  While an undergraduate at Southern Methodist University, studying with Robert Anderson, he was a finalist in the national playing competition sponsored by the American Guild of Organists.  From 1985 to 2001 he served as Associate Organist at Trinity Church, Copley Square.

Among Mr. Wood’s numerous recital appearances are the National Cathedral in Washington, St. Philip’s Cathedral in Atlanta, New York’s St. Patrick’s Cathedral, St. Thomas Church, Church of St. Mary the Virgin, the Cathedral of St. John the Divine, and Trinity Church, Wall Street.  In France he has appeared at Notre-Dame de Paris on two occasions, the American Cathedral in Paris, and at festivals in Bourges and Carcassonne.

Equally appreciated as an accompanist, Mr. Wood’s four compact discs with the Trinity Choir have garnered critical acclaim.  He has accompanied the choir on tour at Westminster Abbey and St. Paul’s Cathedral in London as well as Ely Cathedral and Chichester Cathedral.  He has appeared before regional and national conventions of the AGO, the American Choral Directors Association, and the Association of Anglican Musicians.  His recitals have been broadcast on National Public Radio and the BBC.

With orchestra he has appeared as soloist in Francis Poulenc’s Concert champêtre with the Dallas Symphony under Leonard Slatkin.  As a freelancer Mr.Wood has performed in the Boston Symphony Orchestra under James Levine and Hellmuth Rilling, and in the Boston Pops under Keith Lockhart.

A video of Ross Wood performing the first movement of Charles-Marie Widor’s Symphonie Romane on the Advent organ may be found here: http://www.youtube.com/watch?v=q1mkV-n1VT4. 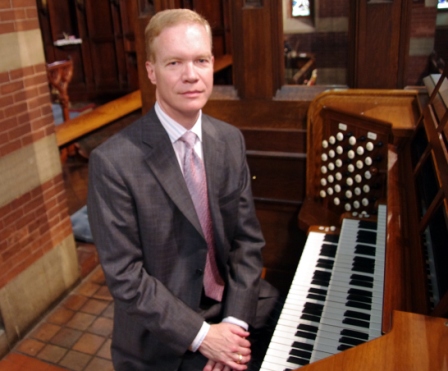