For many people - even many Episcopalians - the style of worship at the Church of the Advent will be unfamiliar, perhaps even rather strange. These questions and answers are intended to address some of the points that most frequently puzzle visitors and newcomers.

Also see: An Instructed Eucharist - Some Remarks by the Rector on Ritual and Ceremony - Glossary 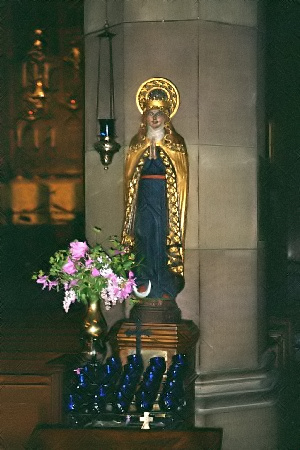 Worship at the Church of the Advent reflects our foundation in the tradition of the "Oxford Movement." Beginning in the 1830s, several Church of England clergy, in reaction to what they perceived as the laxity and spiritual lifelessness the Church in their day, started a renewal which came to be known as the Oxford Movement (because most of them were associated with Oxford University). They advocated a restoration of the pattern of Catholic worship, devotion, and spirituality which originated in ancient times but was lost during the Reformation. The recoveries included an ornate liturgy, private confession, devotions addressed to the Blessed Virgin Mary, and monastic orders, as well as the use of the name "Mass" for the service of the Eucharist.

The word "catholic" comes from a Greek word meaning "universal" and originally referred to essential beliefs held by all Christians. Over the course of history, as a result of various schisms and the consequences of the Protestant Reformation, it has come to identify Christians who hold a specific set of theological and sacramental views. Today, "Anglo-Catholic" describes the beliefs and practices of Episcopalians (Anglicans) who follow the ideas and practices born from the Oxford Movement.

In addition to ceremonial recoveries, scholars of the Oxford Movement also led a rediscovery of classical Catholic theology, which included an elevated view of the Sacrament of the Eucharist, in which we believe Christ to be really present to us in the sacramental bread and wine - His Body and Blood. From a Catholic viewpoint, worshipping Christ present in the Sacrament of the Eucharist is an experience so profound that words become inadequate and ceremonial gestures, such as the Sign of the Cross and genuflections, serve to express some of what we cannot put into speech.

Not unless you want to. The Sign of the Cross and other ceremonials are outward signs of reverence; expressions of deeply personal belief and practice. They are not requirements of our liturgy or "tests" for membership. If you feel comfortable with them, use them by all means. If you have questions, one of the clergy would be glad to explain these customs to you. 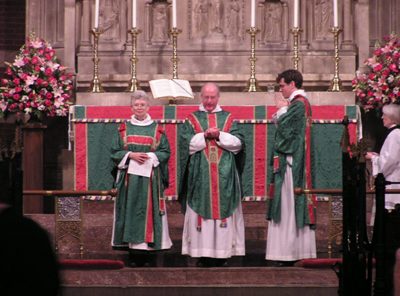 Our liturgy employs a number of ministers, ordained and lay, in roles that enhance our worship. The principal actors in the drama of the liturgy are the Sacred Ministers of the Mass - the Celebrant, Deacon, and Subdeacon. Their liturgical roles and distinctive vestments date back to early Church tradition. The Celebrant presides at the service and consecrates the bread and wine; the Deacon proclaims the Gospel and assists in the ministration of Communion; the Subdeacon reads the New Testament lesson and also assists at Communion. The Celebrant and Deacon are always ordained clergy; the Subdeacon is customarily a layperson who has been specially licensed and trained for this ministry. The other servers and choir play supporting roles in the action of the Mass, all of which draw the focus of attention to the liturgy of God's Word and Sacrament. The vestments we use not only define the roles of the servers, but also express the corporate nature of our worship by minimizing individual distinctions.

The tradition of using incense in the liturgy goes back to ancient Hebrew worship, as recorded in the Psalms: "Let my prayer be set forth in Thy sight as the incense" (Psalm 141:2). As this verse suggests, incense symbolizes the prayers of the faithful rising up to heaven as the smoke rises to the rafters. Incense also appears in the Bible in association with visions of the Divine, most notably in the book of Isaiah and the Revelation to St John. The smoke itself is associated with purification and sanctification; thus, we cense the consecrated elements of the Eucharist to show that they are set apart, and when we cense people we are not only symbolically "purifying" them but also acknowledging that they are set apart by their Baptism.

All baptized Christians are welcome at our Altar. In accordance with the Canons of the Episcopal Church, any person who has been baptized with water in the name of the Father, the Son, and the Holy Spirit may receive Communion in this Church. Please feel free to speak to one of the clergy if you have any doubts or scruples in this regard.

We hope this information deepens your understanding and enjoyment of our worship. If you have other questions about our liturgy or ministries, please speak to one of the clergy.