"This is none other but the house of God, and this is the Gate of Heaven."
- Genesis 28:17, inscribed over the West doors of the church on Brimmer Street.

The Church of the Advent was established in 1844, eleven years after the beginning of the Oxford Movement in England. Its first home was an "upper room" of a building on Merrimack Street in the North End, near present-day Haymarket, from which the parish moved six months later to a hall at the corner of Lowell and Causeway Streets, near what is now North Station. The parish occupied this space for two years before moving in 1847 to a church on nearby Green Street. All of these early buildings have disappeared, as have Lowell and Green Streets themselves, although their former locations can be seen on this 1842 map. (Lowell Street, unlabeled, runs perpendicular to Causeway Street just east of another now-vanished road named Leverett Street.)

In 1863 the congregation moved to a building on Bowdoin Street, now the Church of St John the Evangelist, but was soon well on the way to outgrowing the space. In 1874 the parish bought land at the corner of Mt. Vernon and Brimmer Streets - which, as the 1842 map shows, had not even existed when the parish was founded 30 years before. This land was created from lowering the height of some Boston hills by several feet beginning in the 1850s. (Excavations in our undercroft in late 2003 unearthed several old bottles and other artifacts from the taverns that dotted Boston neighborhoods at the time.) The present building was designed in the Early English Gothic Style by Boston architect and Advent parishioner John Hubbard Sturgis in 1875 and was substantially complete by 1888. 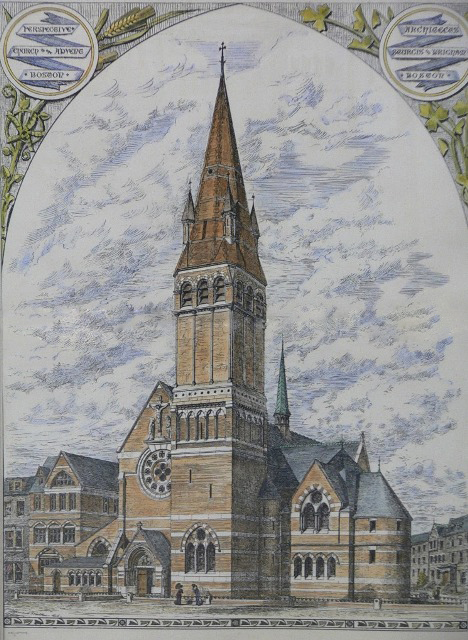 John Sturgis's original design for the Church of the Advent

Entering the West Doors from Brimmer Street one is struck by the grand lofty perspective culminating in the High Altar with its Caen stone reredos of 1891 - designed by Harold Peto of Peto and George in London, a gift of Isabella Stewart Gardner. The nave is, in fact, taller than its length and the space narrows at the crossing, increasing the sense of height and length. 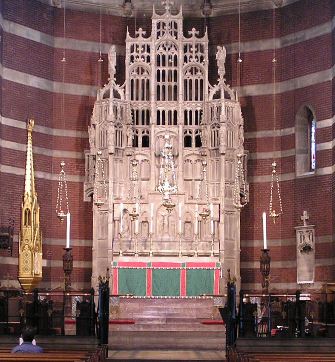 The High Altar Reredos, Hanging Lamps,
Aumbry on left and Credence on right 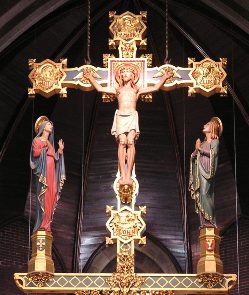 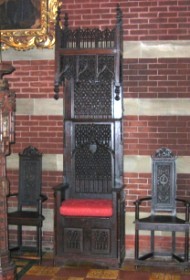 ded high above the choir steps was designed by Ralph Adams Cram in 1925 and replaced the original wrought iron choir screen.* Cram's very first ecclesiastical commission was the credence niche in the polygonal apse wall to the right of the High Altar. Mirroring it on the left of the Altar stands the golden Aumbry or Sacrament House, dating from 1933. Near the Aumbry is a 15th century French bishop's throne given to the parish as a memorial gift in 1871.

* See below for a photo of the church interior from the late 19th century.

Seven brass sanctuary lamps hang above the Altar rail and refer to the seven lamps burning before the Throne of God in the Book of Revelation, as well as the seven gifts of the Holy Spirit. Between them and the High Altar hangs the silver Sanctuary Lamp, lighted when Our Lord is present there in the Blessed Sacrament. The three windows above the Altar in the apse are by Clayton & Bell of London; St, Michael on the left, St. Gabriel on the right and Our Lord in Glory in the center. 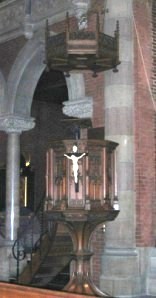 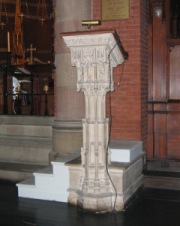 The pulpit, to the left of the choir screen at the crossing, was designed by Henry Vaughan in 1889, and is in the shape of a chalice. It was originally placed in the midst of the nave, adjacent to the easternmost pier, as seen in the photo below.

The Caen stone lectern, on the right side of the crossing, was designed in 1902 by John Sturgis' nephew R. Clipston Sturgis, who also finished the design of the west porch and spire after his uncle's death in 1888. The lectern depicts Moses, flanked by the four evangelists. 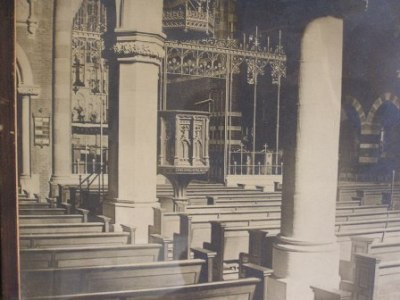 View of the church interior in 1900: note
location of the pulpit within the nave

The organ is located above All Saints Chapel on the north side of the chancel. It was designed by a member of the parish, G. Donald Harrison of the Boston firm of Aeolian-Skinner, in 1936 (Opus 940) and is a milestone in American organ-building, establishing the essence of the American Classic style for decades to follow. The organ and choir are enhanced by the church's crystalline acoustics. The organ has 57 speaking stops from 77 ranks/4529 pipes. There is an unenclosed trumpet in the west gallery. 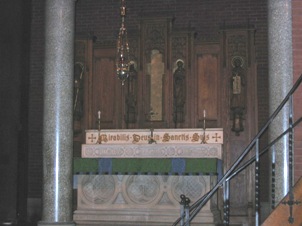 To the left (north) of the choir and unde

r the organ is All Saints Chapel. It is primarily a memorial chapel, containing the Advent's first Altar, designed by Frank Wills in 1850, one of the Advent's first memorial gifts. It is carved with the instruments of the Passion. The reredos behind it was designed by Cram in 1907 and enshrines within it a golden wood cross of 1845 - the subject of much controversy in the early history of the Advent. The four figures in the reredos were carved by Johannes Kirchmayer and depict patron saints of the four parish guilds of the time, St. Benedict, St. Helena, St. Agnes and St. Vincent. On the north wall of the chapel is an icon of the Madonna and Child, a gift of M. Thomas Shaw, Bishop of Massachusetts, in 1999. 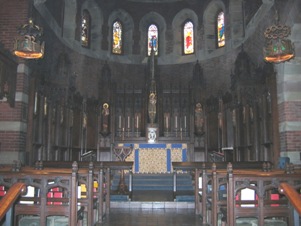 To the right (south) of the chancel is the Lady Chapel, dedicated to the mother of Our Lord. It has a curved apse with six Clayton & Bell windows above the Altar depicting the figures of the nativity story: St. Elizabeth, John the Baptist, the Madonna, St. John the Evangelist, St. Anna and St. Simeon. The Altar itself is very simple, but the elegant oak reredos and woodwork of the chapel were designed, again by Cram, in 1894 and the tabernacle with a door of beaten silver showing a Chalice and Host of 1908 is also by Cram. The carved figures - most by Johannes Kirchmayer - depict important figures in the history of the Advent and the Oxford Movement. 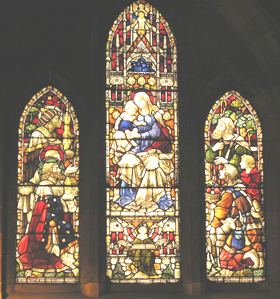 High above in the clerestory of the nave are five windows depicting the five regions of the early church, starting with the first window on the east end of the south nave wall with St. Ignatius of Antioch representing the Syrian Church and west of that St. Athanasius representing the African Church. On the north side starting at the west end is St. Ambrose of Milan for the Latin Church, then St. Chrysostom for the Greek Church and finally St. Columba, symbolizing the Celtic Church. These windows were designed by Christopher Whall, the leading stained glass artist of the Arts & Crafts Movement, in 1910.

The three lancet windows in the north transept depict Great Women of the Church. The three lancet windows in the south transept depict The Apostles. Both windows are by Clayton & Bell and date from 1891. Above the west doors is the great west window called the Jesse Window, and depicts the geneology of Christ back to King David. It was designed by Charles Eamer Kempe. Also at the west end - at the end of the north aisle at eye level - is the Adoration of the Shepherd and Magi or Nativity Window by Clayton & Bell. 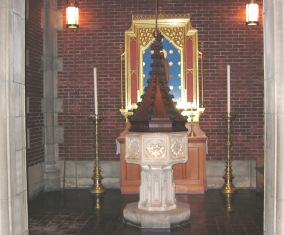 The Baptistry is situated at the back of the church directly under the spire and has the only true masonry vaulting in Boston. The font was designed by Frank Wills in 1850 along with the All Saints Chapel altar for the previous Green Street church. The baptistry credence (not really an altar) was designed by Alexander Hoyle and J. Gregory Wiggins in 1953. The paschal candle stand, which except at Eastertide lives in the baptistry, was designed by Davis D'Ambly and was commissioned in 1999 as a memorial to Harry Crooks, a longtime member of the Acolytes' Guild. 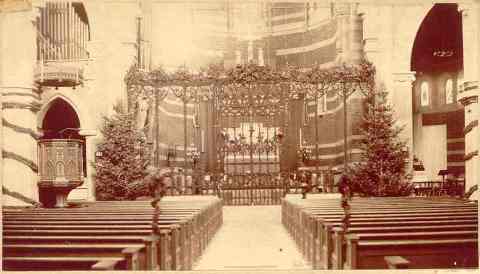 The Church in 1890, showing the original Choir Screen
Exploring the Advent