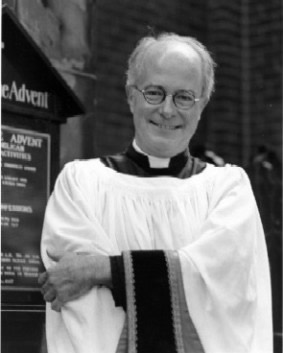 The Reverend Allan Bevier Warren III has been Rector of the Church of the Advent since 1999. Born in Virginia and raised in South Carolina, Father Warren received his undergraduate degree from Princeton University where he majored in philosophy and religion. He later studied at the General Theological Seminary in New York City.

Fr. Warren met his late wife Polly while serving as Curate of the Church of the Transfiguration in New York. After marriage, they moved to Paris, France, where he had been appointed Canon Pastor of the Cathedral of the Holy Trinity (The American Cathedral). Returning to the States, Fr. Warren served as Rector of the Church of the Good Shepherd in Newton, Massachusetts.

The Warrens were first introduced to the Advent community when he was asked to become Assistant to the Rector, a position he held for three years before returning to New York as Rector of the Church of the Resurrection and Headmaster of the Resurrection Episcopal Day School on the Upper East Side. In July 1999 Fr. Warren accepted the call to become the fifteenth Rector of the Advent. He loves movies, likes to cook, and takes long bike rides when the weather permits.