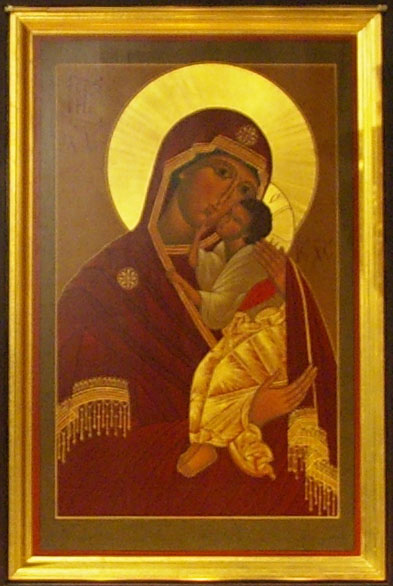 In 1998, our Bishop, M. Thomas Shaw SSJE, presented the Advent with an icon of Our Lady of Yaroslavl, written by a local iconographer. The icon is located in the All Saints Chapel, which also enshrines the Advent Cross (enclosed in the reredos of the chapel altar).

Icons were used in worship very early in Christian history, and much theological wrangling surrounded them due to scruples about violating the Second Commandment ("thou shalt not make for thyself any graven image"). In the mid-fourth century, St Basil of Caesarea - Basil the Great, commemorated in our tradition on June 14 - very sensibly pointed out that no sane person would mistake a statue of Caesar for the Emperor himself: " you do not mean that the stone itself is Caesar, but rather, the name and honor you ascribe to the statue passes over to the original, the archetype." So because an icon, however holy, is only a representation of its subject, the veneration paid to it is actually being given to the saint depicted. Basil's common sense was forgotten in the early eighth century when Emperor Leo III banned the use of icons, touching off more than a century of often-venomous disputation, anathematizing, un-banning and banning again, punctuated by outbursts of vandalism and violence, until a Council convened in 843 by Methodios, Patriarch of Constantinople, definitively validated their use. A detailed discussion of the Iconoclastic Controversy can be found here: http://en.wikipedia.org/wiki/Iconoclastic_Controversy.

Our icon is of a type known as "Tender Mercy," characterized by the Christ Child touching his cheek against his Mother's. The name "Our Lady of Yaroslavl" does not refer to a local apparition, as it would in the West (compare "Our Lady of Fatima"). Rather, Russian icons are named for the place with which they are most commonly associated, whether or not they were produced there. Thus, it is believed that the original icon was brought to Yaroslavl, a town some 155 miles northeast of Moscow, in the 13th century from some unknown source. The legend of the icon associates it with two local princes, Basil and Constantine, who defended Yaroslavl from Tatar invaders and are also honored as saints in the Russian Orthodox Church.

In Western Christian art, the painter is fairly free to depict a Scriptural figure according to his or her own environment, cultural influences, or imagination; thus we have paintings in which the figures resemble anything from Renaissance nobles to modern street people. But in iconography, artistic interpretation or variation from the original is frowned upon, and thus all renderings of a particular icon will look very much alike no matter when or where they were written (icons are always "written", never "painted") or by whom. If you compare our icon to a 16th-century version from the famous Tretyakov Gallery in Moscow, they will differ only slightly: http://www.abcgallery.com/I/icons/icons10.html.

To learn more about icons and to see the finest icon collection outside Russia, visit the Museum of Russian Icons in Clinton, Massachusetts (near Worcester).